Mitsubishi Motors Corporation (MMC) will celebrate two debuts at the 88th Geneva International Motor Show*1, to be held in Geneva from March 6 through March 18, 2018: the European premiere of the MITSUBISHI e-EVOLUTION CONCEPT, and the global premiere of the new 2019 model year Outlander PHEV, which will be introduced to the European market this early fall.

Both the new Outlander PHEV, and the MITSUBISHI e-EVOLUTION CONCEPT embody the cutting edge technology and expressive design MMC is making its own, today and for the years to come. They also express, each in their own way, MMC's product strategy as part of the brand's ambitions: a carefully crafted blend of SUV expertise and electro-mobility technology, augmented with state-of-the-art system integration technologies for a progressive driving experience.

*1…Le 88e Salon international de l'Automobile Genève, with press days on March 6 and 7 and public days from March 8 through March 18. MMC will hold its press conference at 10:45 am on March 6 at the MMC stand in Hall 2. 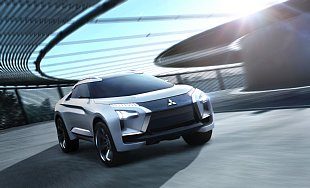 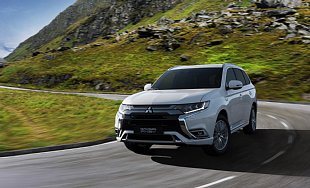 In 2013, and drawing on a background of 80 years of 4WD expertise, 50 years of electro-mobility R&D, and 30 years of rally winning all-wheel control technology, MMC launched the segment-defining Outlander PHEV plug-in hybrid electric Twin Motor SUV. MMC did so ahead of other auto makers.

The 2019 model year Outlander PHEV features a next generation system with both EV and SUV breakthroughs. More SUV and more EV than ever, the newest iteration unveiled in Geneva will push boundaries even further with – amongst others – a complete redesign of its powertrain, with sharper dynamics, a more refined interior, and a subtle design evolution.

The design: Sharp and sophisticated

The MITSUBISHI e-EVOLUTION CONCEPT is a technical prototype to illustrate the strategic directions of a renewed Mitsubishi Motors brand. It incorporates the strengths of SUV, EV, and the tight integration of new systems for a connected mobility customer experience.

The all-electric high-performance SUV embodies MMC's new brand strategy under the new "Drive your Ambition" global tagline, a strategy that reflects an adventurous and progressive mindset for inspirational design and product, based on breakthrough SUVs, and driven by a fusion of electrification and system integration.

Based on a "Robust & Ingenious" philosophy, MMC has created a distinctive and engaging design that gives shape to the robustness, authenticity and functional traits distinguishing MMC vehicles.

MMC has a long and strong heritage. Think of "Mitsubishi Motors," and proven off-road performance, along with superior 4WD control, come to mind. Now, the banner of superior, high-performance 4WD control is carried forward by the MITSUBISHI e-EVOLUTION CONCEPT. Its design expresses the readiness to grip the ground with all four-wheels, and the agility of a high performance cross-country tourer.